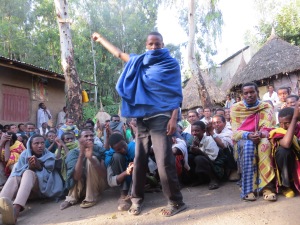 I wanted to get to know the Abun Bet Gabriel School better.  So I spent the night with the students.  I arrived as it was getting dark.  At dusk the bell rang and students slowly gathered for the prayers.  Then came the teaching at 7pm.  The open space at the centre of the school was packed with the 400 students sitting on old plastic upturned buckets.  The teacher sat in an old steel tubular chair, wrapped in a white blanket, or gabbi, so even his head was invisible.  One of the students stood in front of him.  He muttered the lesson – first Ethiopic vocabulary, then a total of nine poems, or qene, which he had composed for the occasion as demonstrations.  After each section the student shouted out what the teacher had said and repeated it several times.  Then all the 400 students repeated it in a huge rolling cacophony of sound until the teacher clapped his hands and silence fell.

This went on for nearly three hours and then about 10 pm the students dispersed to talk over the lesson in small groups late into the night.

The sounds of the teacher quietly repeating his poems, the student shouting out the words and then the wilder shouts of all the students together were strange and echoed around the hillside.  There was a warm and gentle relationship between the students.

As I left the next morning, I was tired but reflected that I had shared for just one night in the oldest educational syllabus still taught today.

This entry was posted in Uncategorized. Bookmark the permalink.